A few weeks ago, I was at a popular yeshiva day school in the tri-state area. While I was there, the school was holding a “parade” to celebrate the boys’ hockey team recent victory in their league’s championship. The whole school came out to cheer the team on, as the boys were loaded onto the back of the pick-up truck. The truck was then preceded by a police officer on a motorcycle, and the team waved gleefully as “We Are The Champions” played on the loud speakers.
I completely understand the benefits of such a parade. The parade, very clearly, promoted an amazing amount of school spirit that both the team and the spectators could partake in. It was almost palpable. Winning first place is a huge triumph and the school should be proud. I can only imagine was the 3-year-olds were thinking as their own boys hockey team was paraded around by a police officer. I’m sure it made them feel proud for going to such a day school, especially at such a young age.
However, as someone who is merely sensitive to minorities within the orthodox community – what about the boys who don’t like sports? And perhaps get bullied for it? What about the few gay children who go to this school? Who might not like sports and are uncomfortable with that?
By putting the hockey boys on a pedestal, the school and community are automatically making hockey, and sports in general, elitist. Which is fine! Sports are an important facet of our society, especially within the orthodox community.
But if the model UN team won the “championship” – would they get a parade, too? If a talented, artistic student won an award for their “Best 8th Grade Painting,” would he or she be recognized as much as the hockey team was? This, of course, is just hypothetical rhetoric.
I have absolutely no problem – and in fact, I support – the hockey team’s parade. They worked hard, and the school and team deserve to bask in their pride and glory. School spirit is an important thing, and this definitely creates that feeling.
The only thing that is troublesome to me is the message this parade sends, school spirit aside. Is hockey really the only thing you can be good at to get a parade? Are sports the most elite thing you can be successful at within the orthodox community?
I recently saw the movie "Bully," which is a moving documentary currently in theaters that depicts bullying in American schools. If a child does not like sports and is uninterested in involving him/herself in them, what if he/she wants to become a thespian? Or an artist? Or the team’s manager? Not only will their successes (seemingly) not be as recognized as much as other students’ success in hockey or sports in general, but also: they are more at risk at getting bullied.
I have no proof of correlation between the parade, bullying, and un-sporty children. I only have my observations and thoughts. I’m just nervous for the future, unpopular kids; I’m nervous their achievements won’t be as recognized as those students who are recognized for their athletic talent, and I am nervous that this could, potentially, perpetuate harassment, depression, and in extreme cases (as mentioned in the film and in the media recently) – suicide.
Maybe some school administrators, one day, can think about these things, too, and help to make everyone at school feel comfortable, safe, and special – regardless of what their interests and talents are.
Posted by Sam at 11:38 AM 7 comments:

My apologies - I’ve been struggling to find time to blog, even though my experiences and thoughts regarding my blog have been ongoing. I have much to write about, and I am planning on sharing everything scattered over the next few weeks.

I’m going to start with an event that occurred at UMD in February. I helped organized a JQY (www.jqyouth.org) shabbaton at Maryland. Ten JQY members came down to campus for the shabbaton, which included three panels over the course of the weekend. On Friday night, there was a panel about “growing up frum and gay: personal narratives and Q&A.” Shabbat day included a panel titled “Orthodoxy and Homosexuality: Halacha, Community, and the Future.” Lastly, during the evening on Saturday, a final panel took place, covering issues regarding gender-identity and gender non-conformity in orthodoxy.

All in all, it was a very successful weekend. The JQY members really enjoyed the warmth and impressiveness of Maryland’s orthodox community. Additionally, the community really appreciated the panels and sharing that the JQY members did. They were greeted positively and with open arms.
JQY has done a similar shabbatonim at other Universities across America, and each one is important. For a lot of the orthodox Jews that attend secular Universities, their respective college campuses are the first exposure many of them have outside of their orthodox bubbles. It was for me and many students like me.

Through these panels and shabbatonim, JQY does two things: Firstly, and most important, they are able to impart the knowledge and awareness of the existence of homosexuality to the general student body within in the orthodox community on both a personal and objective level.

Secondly, JQY brings awareness to those few students who may be questioning their sexuality. For these students in particular, they may have never known that a community of orthodox, gay Jews exists. They may have suffered emotionally and/or felt restricted by their community. By hearing these panels and hearing the stories of several gay, orthodox individuals, some of the students learn that they are not alone; they learn that gay, orthodox Jews exist, and that they can take the necessary steps they desire to take that they may not have had the courage to take before.

There was an article written about the Friday night panel in The Mitzpeh, the Jewish newspaper of UMD.
**disclaimer: there were more than 75 people at the panel. Additionally, I feel that a lot of important information was omitted from the article**
http://www.mitzpeh.com/news/lgbt-issues-at-umd-1.2809048#.T3CK9-yXSCg

Be My Friend, Not Just My Shopping Buddy

Stereotype: A widely held but fixed and oversimplified image or idea of a particular type of person or thing. (www.m-w.com)
One could argue that our society tends to oversimplify things. We like clear, concise, and compartmentalized ideas, people, groups, and communities, etc. Thus, stereotypes exist. And people subscribe to stereotypes because it’s easier to group people or things into more umbrella categories. Shallow us? Perhaps. But in reality, it’s just the natural, judgmental tendencies of humankind.
If you identify as someone who is ethnically, racially, sexually, or religiously a minority (or some combination of these), there is likely a stereotype for you. Lucky me, I’ve had many stereotypes associated with me over the years, but most recently, of course, there is the fact that I am gay. And that’s what I wanted to dedicate this blog posting to.
You know, just because I came out of the closet and am now openly gay does not mean that I know all of Lady Gaga’s Lyrics, or that I am obsessed with RENT, or that I am a good shopper, or that I “should know these things” about fashion, or that I am up for sale as a gay best friend. Those of you who have thought this or spoken to me about this, don’t worry – you have done absolutely nothing wrong!! Our society has created these stereotypes and you have subscribed to something that is very broadly expressed in our culture.
However, I urge to look past these stereotypes just for a minute. I am more than just the stereotypical gay man and many of my true friends can tell you that. In fact, many gays lack the stereotypical labels that our culture has created for us. If those girls who just see us a gay best friends, or a shopping buddy, or someone to get fashion advice from actually got to know us and treated us like everyone else, maybe those girls could see past the stereotypes, past the negative labeling, and become true allies (True Allies!) of us gay individuals. True allies are great. They make no distinction between their straight and gay friends. And those are the individuals that don’t subscribe to stereotypes. They are rare, but they are great.
So, no. I don’t like froyo. I don’t even know who Liz Lemons is. And I have yet to have a “Wednesday Girls Night Out.” But I hope you ladies have fun. Maybe I can do your makeup before you leave? Just kidding.
This video is very humorous, but reflects this posting quite accurately:
This video is so damn accurate

I was at an orthodox wedding a few weeks ago and noticed something very interesting. After making my way through the extensive shmorgasboard (sp?), I ventured into the “chosson’s tisch,” as per my male-y duties. It was there that I noticed a pan or two of hotdogs, hamburgers, and French fries. It hit me: why was there none of this food in the general shmorgasboard, the one intended for the woman during kabbalat panim?
I asked a few friends at the wedding why they thought such a phenomenon existed and the general understanding was that hotdogs, hamburgers and French fries are “boy food” – meaning they are less dainty than grilled Portabellos, chicken stir fry, or turkey carving stations – i.e. other, less boy-ish shmorg foods.
However inconsequential this difference in food was at the wedding, I found it perturbing. I know many a girl who enjoys eating “boy food.” Why do distinctions even exist in food? Why is food associated with gender? Why can’t boys eat dainty things and girls eat messier, meatier, and/or greasier things? My overall issue with the gendering of food relates to tradition. What it comes down to is that traditionally, men enjoy foods like hotdogs and French fries and girls have tended towards vegetables and lighter foods. But why does that need to be a case? Tradition is important, especially in religion (I know every word to Fiddler On The Roof’s musical opener). But will breaking tradition when it comes to food really upset anyone that deeply? Or cause chaos? Probably not. So let the girls eat some damn hotdogs.
My second issue with gendered food at this wedding – and this one is slightly more charif (food pun intended) – also relates to tradition. There is a heavy emphasis on tradition in Judaism (as outlined in the opening number of The Fiddler On the Roof). And for good reason, too! By being gay, however, I am intrinsically breaking tradition. So much of Judaism’s traditions base themselves upon gender, gender roles, and heterosexuality. Unfortunately, not everyone is heterosexual, and only in recent years are more and more orthodox Jews coming out as gay. In order to not only accept, but to recognize them within the orthodox community, tradition needs to be viewed differently. And we can’t start with such things as “boy food.”
I am not sure what to suggest in terms of “breaking tradition” on homosexuality in orthodox Judaism, mostly because I don’t want to get my head bitten off from angry readers, but also because I don’t yet have a flawless suggestion. Heterosexual traditions are a staple in our religion, and I am not asking to uproot those foundations. All I would like is for homosexuality to be recognized as merely existent in orthodoxy and for people in the community to respect an “untraditional” (re: gay) couple – just like they can respect a girl eating a hotdog.
Posted by Sam at 4:22 PM 13 comments: 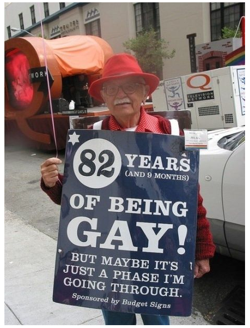